Comments Off on Secretary’s Note

MATTERS ARISING: Letters of appreciation from the two Honorary Life Members appointed had been received.

GENERAL SECRETARY’S REPORT: Membership increased from 49 members at start of season to 61 at end of this A.G.M.

Forum Blog continues to be successful and useful means of communication/publicity.

New Tablecloth made its debut at first meeting in January!!

PROGRAMME SECRETARY’S REPORT: Average attendance over 30 for meetings this last season ahead of the 28 it had been for many years.

Highest total of Members/Guests at Open Meeting/Ray Coggan Memorial Lecture given by Judge Derek Clarkson was 40.

Tribute to Brian Blakey for his membership and work as a member but sadly no longer attending due to illness.

Loss of John Pearce commented on.

Volunteers for “Votes of Thanks” for Speakers would be welcomed.

Forum responsible via Speakers and Direct donations for £450 in charitable contributions.

Open Meetings and Members Meetings to continue in new season.

Chairman Bill Blades thanked for his efforts as Chairman as were John Clark and the Catering team. Also Mike South for his weekly setting up of meeting room.

John Taylor thanked for another excellent years programme of Speakers.

No increase in Annual fees or Subscriptions for the next(37th) season.

£30 donated to Church towards purchase of Lapel Microphone–agreed by Meeting.

Annual Visit: John Taylor to lead a group of Forum Members on a visit to Ripon Museums on 7th May 2013.

Provision of Membership Database Information discussed at meeting but significant majority against it being provided.

Forum Membership limit of 60 dispensed with as agreed by meeting—would be revisited if attendance figures significantly increase in future.

Request for 5/10 minutes at end of each Forum Meeting to consider items of common interest or where support/expertise could be provided. Meeting agreed it was a worthy idea and will be trialled for 2 months in new season by Chairman under “Any Other Business” agenda item. 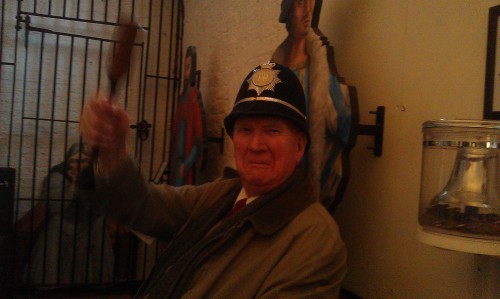 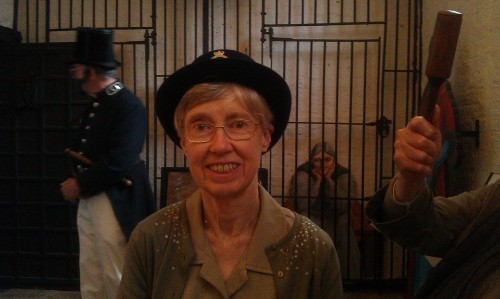 FORUM VISIT TO RIPON MUSEUMS
A party of 13 gathered at Ripon Workhouse Museum for a conducted tour by John Owen, our very knowledgeable guide. The building in the Dutch style dates from 1854. All classes of society feared the workhouse as any family could be hit by financial misfortune. Men and women were segregated and issued with institutional clothing, although the food was adequate but basic.  We saw the Board of Guardians’ room, the vagrants’ area where decontamination took place and the individual cells. The programme of work included stone-breaking and wood-cutting in the yard outside.
Members split up for lunch, some enjoying homemade food at Tiffins on site, others going into Spa Gardens to the cafe there on the first really warm day of the year.
At 1.30 all proceeded to St. Marygate where we were greeted by a Peeler in top hat and white breeches at the Police and Prison Museum.
The buiding was a prison in the 19th Century,then a Police Station until 1956. THe bleak prison cells now house a display of Police history and various methods of punishment.  John Taylor was put into the pillory and Mike South was about to be flogged at the whipping post but both escaped to enjoy another Forum season. One of the upstairs cells still has its ” punishment crank” with its adjustable screw to make the work easier or more difficult. This is the origin of the term “screw” for a prison warder. Thanks to John Holmes and Harry for showing us round.
I think everybody enjoyed the day although I had anticipated more support. Derek and I expect to be at Lucinda’s most Tuesdays from 11.30 during the summer and hope that others will sometimes be able to join us.
John

The Annals for 2012/2013 season have been added to the Archive section of the blog.

Comments Off on SECRETARY’S NOTE

At the start of the season on October 2nd the Forum had 49 members on the books all of whom had Programmes and “Welcome Back” slips sent.

–Dennis Anderson was added to the members at the first meeting having attended as a guest in the previous season.

–Harold Dawson was re-entered onto the membership having being removed the previous year.

–Rosalind Crew our contact in the Church was forwarded a programme for inclusion on the Harlow Hill Church Webpage which links with the Nidd Valley Methodist circuit.

—Two letters of thanks from the two Honorary Life Members Reg Jackson and George Mountford were advised to Forum members.

–Forum appeared in Harrogate Advertiser in full-page spread of dialogue and pictures in “Club Focus ” section.

–Christmas Lunch at Ascot House well attended and monies raised split between Alzheimer’s Society and Hebe Barlow (Project Trust student spending one year at rural primary school teaching in Namibia—£80 given to each.

—Sadly having been unwell at the Christmas Lunch the death of John Pearce was advised a few days later–a loss to the Forum of a popular and supportive member.

—Tribute to John Pearce given by John Taylor.

–The new table-cloth made its first appearance!!

–President’s Morning which also saw a short request from Geoff Scurrah regarding “Harrogate in Bloom” and Secretary Neil Ramshaw advised members of a charity appeal for volunteers from Harrogate Easier Living Project.

–Saw the second Open Meeting of the season and Chairman Bill Blades welcomed attending guests (Ladies ) to the Forum.

–A change to March’s programme was announced with the speakers on the 19th and 26th changing places with each other.

—Roger Bancroft deputized as Chairman for Bill Blades who was attending the 1000th meeting of Bilton Men’s Forum.

–The Forum was sadly advised of the death of member Jim Bromhead after a period of serious illness.

–Another late change of speaker occurred as Mr John Bevers cancelled due to a severe throat infection. Mr Terry  Frazier came in as a late replacement and as befits a volunteer lecturer with the National Trust for 38 years gave an excellent illustrated talk about the Trust in the Lakes and North East.

–It was decided the May 7th trip would be to visit Ripon Museums.

—Visit to Ripon Museums led by Roy Smith concludes the 36th season of the Forum.

At the end of the season on May 7th the Forum had 60 members registered on its books.